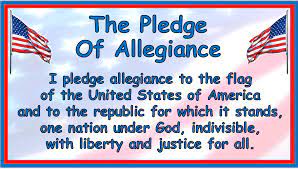 1. When the flag is displayed over the middle of the street, it should be suspended vertically with the union to the north in an east and west street or to the  east in a north and south street.

2. The flag of the United States of America, when it is displayed with another flag against a wall from crossed staffs, should be on the right, the flag’s own right [that means the viewer’s left –Webmaster], and its staff should be in front of the staff of the other flag.

3. The flag, when flown at half-staff, should be first hoisted to the peak for an instant and then lowered to the half-staff position. The flag should be again raised to the peak before it is lowered for the day. By “half-staff” is meant lowering the flag to one-half the distance between the top and bottom of the staff. Crepe streamers may be affixed to spear heads or flagstaffs in a parade only by order of the President of the United States.

5. When the flag is suspended over a sidewalk from a rope extending from a house to a pole at the edge of the sidewalk, the flag should be hoisted out, union first, from the building.

6. When the flag of the United States is displayed from a staff projecting horizontally or at an angle from the window sill, balcony, or front of a building, the union of the flag should be placed at the peak of the staff unless the flag is at half-staff.

7. When the flag is used to cover a casket, it should be so placed that the union is at the head and over the left shoulder. The flag should not be lowered into the grave or allowed to touch the ground.

9. That the flag, when carried in a procession with another flag, or flags, should be either on the marching right; that is, the flag’s own right, or, if there is a line of other flags, in front of the center of that line.

10. The flag of the United States of America should be at the center and at the highest point of the group when a number of flags of States or localities or pennants of societies are grouped and displayed from staffs.

11. When flags of two or more nations are displayed, they are to be flown from separate staffs of the same height. The flags should be of approximately equal size. International usage forbids the display of the flag of one nation above that of another nation in time of peace. The order of precedence for flags generally is National flags (US first, then others in alphabetical order in English), State (host state first, then others in the order of admission) and territories (Washington DC, Puerto Rico, etc.), Military (Army, Marine Corps, Navy, Air Force, Coast Guard), then other. Read more.

12. When displayed from a staff in a church or public auditorium on or off a podium, the flag of the United States of America should hold the position of superior prominence, in advance of the audience, and in the position of honor at the clergyman’s or speaker’s right as he faces the audience. Any other flag so displayed should be placed on the left of the clergyman or speaker (to the right of the audience). Please note that the old guidelines differed from this updated and simplified one.

13. When the flag is displayed on a car, the staff shall be fixed firmly to the chassis or clamped to the right fender.

14. When hung in a window, place the blue union in the upper left, as viewed from the street.